The Romeo y Julieta marque was established in 1875 by Inocencio Alvarez and Mannin Garcia. The brand is named for Shakespeare’s famous tragedy, Romeo and Juliet.

Between 1885 and 1900, the brand won numerous awards at different tasting exhibitions (as still evidenced by the gold medals on the brand’s logo). However, the brand truly bloomed after it was acquired by Jose “Pepin” Rodriguez Fernandez, former head of the Cabanas (cigar brand) factory in Havana, and his firm, Rodríguez, Argüelles y Cia, in 1903. Being a very cosmopolitan man, Rodriguez constantly traveled across Europe and the Americas, actively promoting his brand, and entering his Horse, the aptly named Julieta, in racing events across the world.

As a result of his salesmanship, the brand became exceptionally popular around the world among wealthy customers, many of whom demanded personalized bands for their cigars. At its height, as many as 2000 personalized cigar bands were produced for customers. The brand was also known at this time for specializing in figurado cigars, such as perfectos and pirámides, with over a thousand such shapes believed to have been in production.

Sir Winston Churchill was perhaps the brand’s most famous devotee. The flagship vitola of the brand is named in his honor, a long 7″ by 47 ring gauge cigar known as the Churchill. Nellie Tayloe Ross, the first woman to serve as governor of a state in the U.S., also frequently smoked them.

After Rodriguez’s death in 1954 (he was 88 years old), the revolution, and the subsequent nationalization of the tobacco industry, the brand was moved to La Romana in the Dominican Republic, where production of a Romeo y Julieta cigar for the American market continues today under the direction of Altadis SA. The Cuban government nationalized the brand and still produces and distributes it worldwide as one of its top-selling global brands. 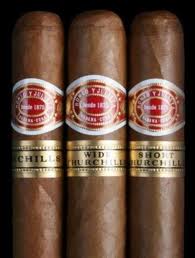 In 2006, a new addition was made to the regular Romeo y Julieta lineup. The Short Churchill size, a Robusto, was introduced at the 8th Annual Habanos Festival in Havana, Cuba in 2006.