How to Smoke a Cigar

If you’re ready to join the ranks of cigar smokers, here is how to get started. The first step is selecting the right cigars to “practice” with. You should start by choosing several different single cigars at Southern Cigar. Do not buy a box of cigars until you have sampled a few singles, first. Don’t be afraid to ask our friendly staff for advice. 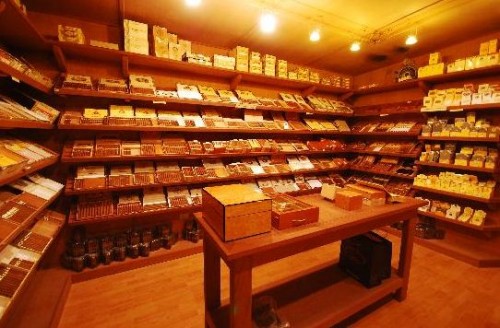 Today there are a larger variety of cigars than ever before. Selecting a cigar is the first and most important part of the experience. First, decide the level of body you are comfortable with. Strength for the sake of strength is overrated. A full body cigar should be felt in your stomach rather than in your throat or on your palate. The thickness of the wrapper leaf is a good measure of the body of a cigar. A thicker wrapper will generally deliver fuller body as it has a greater amount of oils. The thickness of the wrapper can be gauged by looking at the area where the wrapper overlaps in a cigar. Next, you will need to decide on a size. This should be determined by the amount of time you have available for smoking as well as the amount of smoke you enjoy. The large ring gauges (52-60) deliver large amounts of smoke and flavor. The medium ring gauges (43-50) are ideal for most blends as they are a good balance of smoke and flavor.

Mild cigars are recommended for beginners since the more full-flavored cigars would most likely taste too strong (or just plain bad) to a new smoker. Mild cigars are also the least expensive, so you won’t have to worry about ruining an expensive cigar by lighting it incorrectly, or by cutting too much off the tip or closed end.

Once you have determined which type of cigar(s) to purchase, then gently squeeze the cigar to determine if there are any hard or soft spots. You don’t want to take a chance on buying a cigar with a bad draw, or worse yet, one that is plugged and not smoke-able. Tip: Reputable tobacconists like Southern Cigar and Tobacco will usually replace a plugged cigar. Also, inspect the wrapper for cracks or discolorations.

If you do not yet own a humidor, do not buy more cigars than you can smoke within a couple of days, and make sure to leave them in their cellophane packaging (if applicable) until you’re ready to smoke. Never leave an unprotected cigar exposed to the elements, as it will quickly dry out. You can temporarily store cigars in a Tupperware or similar container.

The closed end (or tip/head) of a cigar is the end that you put into your mouth, but you have to cut it, first. When a cigar is hand rolled, a cap is put on the head of the

cigar to keep it from unraveling and drying out. A cigar should not be cut until you are ready to smoke. There are three styles of cuts, and several types of cutters, but the straight cut made with a guillotine cutter is the most common. Hold the cigar with one hand and the guillotine with the other, then insert the head of the cigar into the guillotine and cut into the cap, usually about 1/16 to 1/8 of an inch down. If the head of the cigar is shaped like a cone, then cut into the cone, but not quite at the widest part. In any case, do not cut into the body of the cigar. That would cause the wrapper to unravel, and ruin your smoking experience.

The most primitive way of cutting the head of a cigar with absolutely no tools is to bite it with your teeth. This is a last resort, and should NEVER be done with an expensive premium cigar, as the cigar is much more valuable than a basic cutter. Biting a cigar, or otherwise cutting it improperly, will cause the wrapper to unravel, and could even damage the binder and filler tobacco inside. If available, use a sharp knife and a cutting board, or a pair of sharp scissors. You can also use a pen or pencil to punch a hole in the cap. If the cigar costs more than $5, do not cut it until you have a cigar cutter. It will be worth the wait.

How to Light a Cigar

After being cut, the cigar is now ready for lighting. Butane lighters or wooden matches are recommended. It is important not to introduce chemicals or other flavors or substances into the cigar as it is being lit (never use a scented candle). There are many types of lighters on the market, but butane torch lighters work the best outdoors, especially on a breezy day.

Light your lighter with one hand, then grip your cigar around the band (or about an inch or two from the head) using your thumb, index finger, middle finger, and ring finger (if necessary), and place in your mouth. Position the end of your cigar just above the top of the flame, being careful not to let the cigar actually touch the flame. Begin puffing on the cigar, then slowly begin to rotate the cigar while continuing to puff. Depending on the size of the cigar, you may have to continue puffing while rotating the open end above the flame for at least 10 to 20 seconds (sometimes longer,) until the tobacco around the outer rim begins to glow, and the smoke begins to easily draw.

Now that your cigar is all fired up, it’s time to smoke and enjoy it. Continue to puff and rotate about every 30 to 60 seconds. Do NOT inhale the smoke, just taste it in your mouth and blow it out. If you smoke a cigar too fast, it will burn hot and ruin the flavor. If you smoke too slow, it will go out and you will have to keep relighting. Since most hand rolled cigars are made with long filter you will not have to flick the ashes until they are at least ½ to one inch long, depending on the cigar (and any wind conditions, if you are outdoors). You can smoke a cigar as far down as you wish, depending on the taste.

Drinks to Accompany a Cigar are Important! 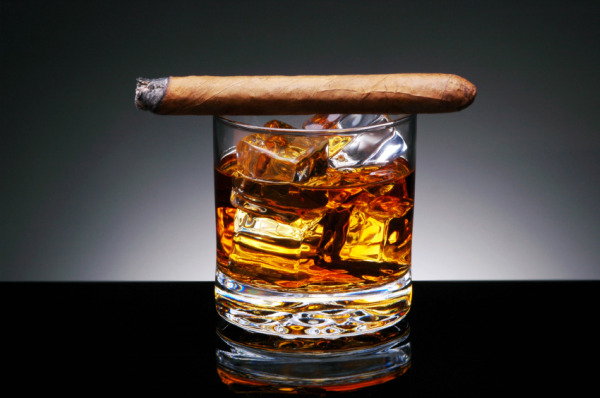 Other than the taste and draw of the cigar itself, the drink chosen to accompany a cigar is the second most important factor that will affect your enjoyment of the smoking experience. If comparing different cigars, always make sure to have the same drink. Many drinks are compatible with mild cigars, but as you move up to medium and full flavored cigars, it is important to choose a drink that will not be overpowered by the flavor of the cigar. Scotch, Brandy, Whiskey, Vodka, Wine can accompany any cigar.