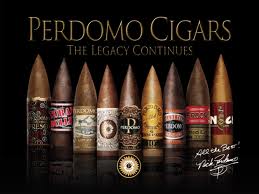 Perdomo Cigars are a third generation legacy company that can be traced back to Silvio Perdomo in San Jose de las Lajas, Cuba. Silvio was a cigar roller for several companies until his imprisonment after the Cuban revolution in 1959. Silvio Perdomo was held captive in harsh conditions for three years, then for the next twelve years he was held at La Cabana and four other facilities, as an enemy of Fidel Castro. Silvio was allowed to immigrate to the United States in 1974. His son Nick Sr. whom followed in his cigar rolling footsteps,  was also against the communism  and  was shot twice, to later leave a hospital on a gurney, escaping execution. After recovering through the kindness and help of a friend, nick Sr. immigrated to the United States. Nick was able to do so with a sponsorship through the Catholic Church, he settled in Washington DC. Only to fight poverty working as a janitor for a mental institution for a meager $11 per week, Nick Perdomo Sr. and his family relocated to Miami, Florida in 1976.

Nick Perdomo Jr. bound to follow in his grandfather’s and father’s footsteps launched a home based business, after completing time in the United States Navy. Nick Jr. was working as an air traffic controller during the day, and was working with his wife in the evenings launching Perdomo Cigars out of his garage. In August 1992 the beginnings of what is widely known today as Tobacalera Perdomo was born, the new company name is Nick’s Cigar Company.

Today Perdomo’s manufacturing is in an impressive 88,000 square foot facility, the second largest in Esteli Nicaragua. The facility is often referred to as “El Monstro” (the monster), Nick Perdomo Jr. serves as the President grooming his son to be heir to this magnificent and humble company.

Today the Perdomo Cigar is considered to be one of the best in the world in flavor and in price. I find the history of these cigars to be quite intriguing. When other cigar company’s raised their price, Nick Perdomo Jr. lowered the price of his Perdomo Cigars, stating that the quality will be the same. He is noted saying he wants cigar lovers to be able to afford his cigars despite the economy or the tax increases on tobacco.

As you can see this once garage based business has become a legacy to be carried on for many years to come. The Perdomo Cigar will be passed on for so many more generations. It is amazing to know such fine flavor and superb effort can transform into one of the best hand rolled cigars in the world. I am honored to smoke these amazing cigars.